Congrats again to @Kori, October's winner.​
High tech or low tech, since 1925, it's been standard on most vehicles.

For this month's challenge, show us your odometer and maybe tell us how you got some of those miles!

We do have some basic rules:
Winners will receive:

Good luck to all who enter!
~MR
Reactions: Robert.Mauro
Save Share
Reply Quote
1 - 20 of 23 Posts

maybe in the next 2 years.

It is the nicest vehicle I've ever owned. Across 311 miles you can see it is running 29.4 MPG: spot on. In another 200 miles it will get thirsty for the first time. And right this moment it is warming my heart with a Chris Smither song that could be about this car's exterior: Can't Shake These Blues.

At 69 degrees it is a full autumn day, and my lovely Cosmic Blue Pearl is crying for its first romp on some trails, taking me, fly rods, friends and guitars where we need to be.

This Subaru has most of its lifetime exploring various parts of Oregon and Washington as well as being a ham equipped road marshal for stage rallies. Now it is located in Colorado and I am sure it would continue to do the same.

This Subaru has proven to be super reliable whether it on pavement or not even it was injured. There is just something about this special vehicle that won't give up. The mini Outback is my Outback's traveling buddy.

· Super Moderator
2008 OB Limited 2.5i, Portland OR USA
Joined Oct 3, 2011
·
10,354 Posts
Here's my odometer post, in better resolution than my avatar. It's been a while and this vehicle has accumulated quite a few more miles than the 88,189 that are shown here - not quite double - but thankfully most of them were without the driver you see here!

Yes, we are underway, as the tach and speedo attest. Do note the proper 10 - 2 paw positions. And no, this isn't road rage; he's always like this. 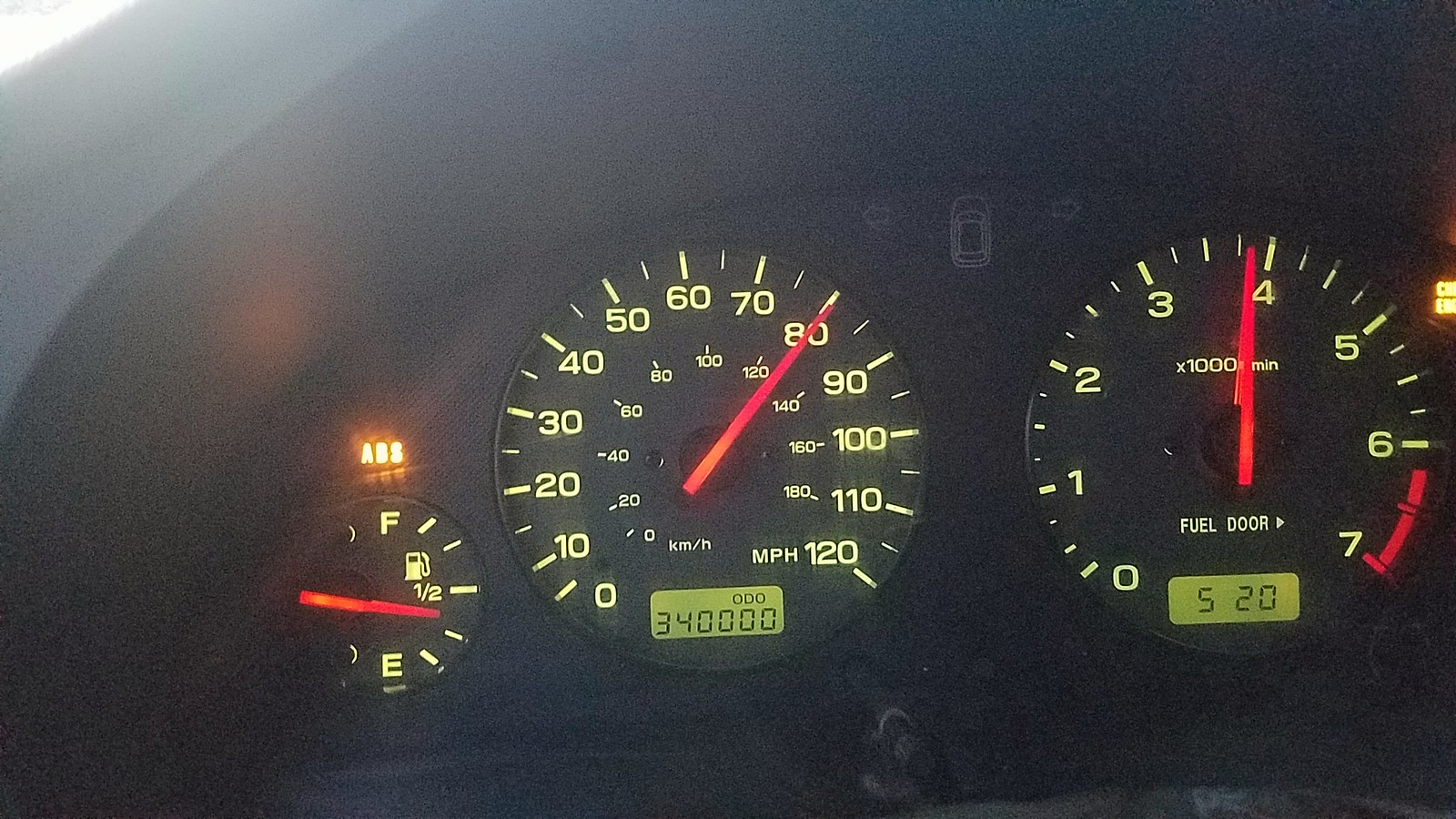 Not a normal milestone on our '04 VDC, but it means we've doubled the mileage on it since we've had it (it was "totaled" at the time). We've taken it to the local OHV park, we've camped in it, we drove from here in northern MN to visit my inlaws in coastal SC, marshalled multiple stage rallies (including bannering Nemadji rally several times), 2 Boundary Waters trips, both our kids came home from the hospital in it. 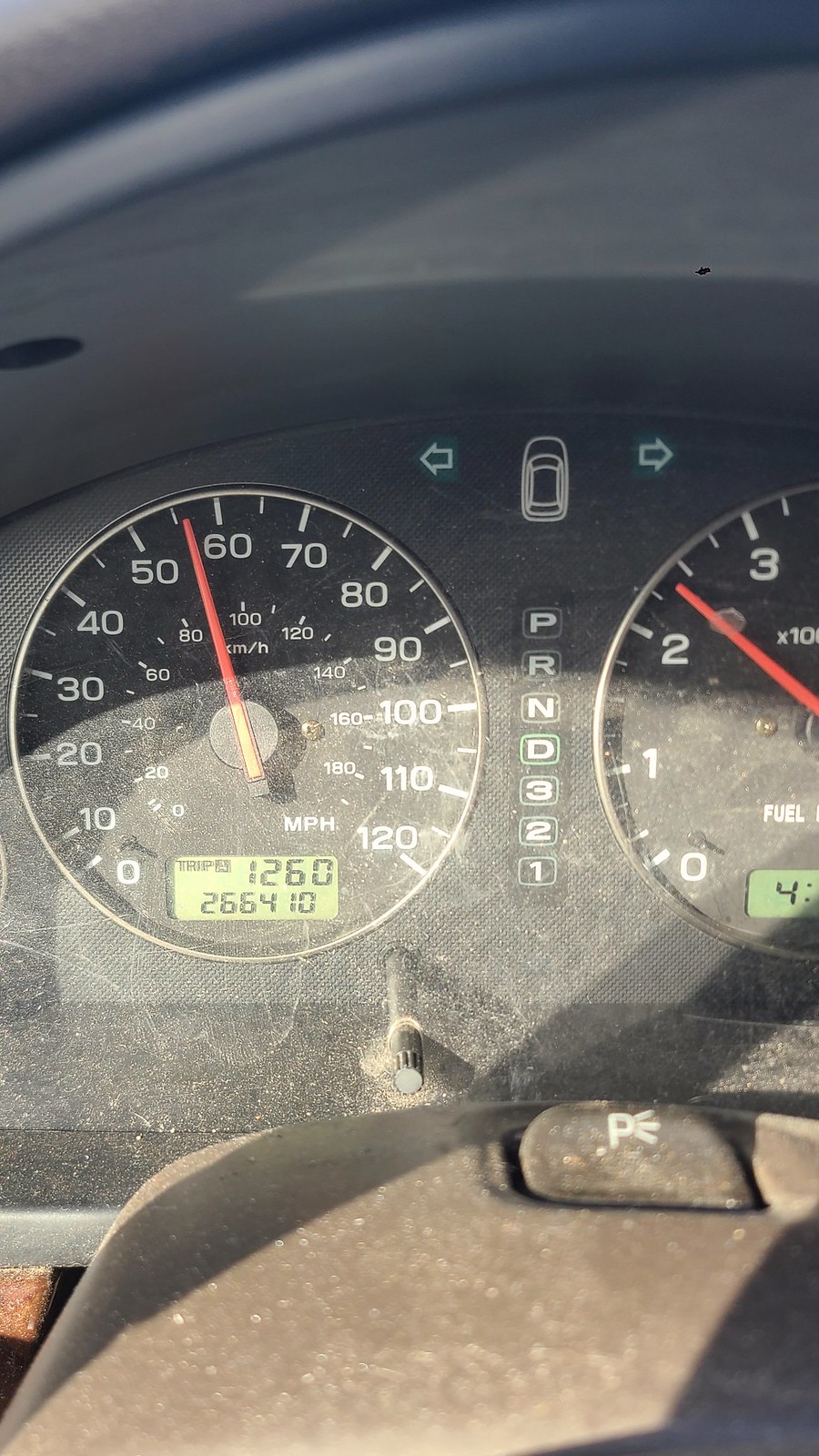 Thinking about turning it into a rock crawler. I bought a Nissan transfer case, and I have a Ford 8.8 solid rear axle and a Dana 30 front....have to get the new daily done, first.

I have 3 more Outbacks with over 200k on them, but I got them that way, so that's boring.

· Registered
2014 Outback 2.5i Premium
Joined Jul 12, 2021
·
89 Posts
Although this car doesn't have even half the miles that my old Subaru does, I still hope it keeps holding strong. Most of the miles are not mine, since I got it at 100,000 miles, but those that I have added have been great. The car has been all over Washington State and part of Oregon, but I hope to take it more places over its lifetime.


And yeah, my car buddy is Master Chief.
Y


Approaching the one year of ownership, which is November 24th, 2022.

Initially did a lot of in-town driving because work is so close, so there was no freeway driving. Then from June 2022 through September of 2022, I worked at another company until they lost the contract for the account, so it is back to in-town driving again.

Anyone who has seen my post in the gallery "This is CoCo" knows what we have done to it. We have on order an underhood battery tender that will be installed on Sunday, the 6th of November.

All these miles have been trouble-free except for some nails in the tires that required visits to @Discount Tire to repair them. Everything else has worked like a charm. We put the Whiteline bar on it at around the 3,000-mile mark and no pops, bangs, explosions, or parts littering the roadway have occurred.

She also carries roughly 250-300 pounds of gear in the rear every day.

· Registered
2013 OB Premium, 4-banger, 6-stick
Joined Oct 17, 2021
·
187 Posts
This picture was taken somewhere in Canada in 2017. It's the 2013 Outback Premium 2.5L that I took home brand spankin' new September 10, 2012, ten years and two months ago today, with the odometer reading 000024. I lived in Seattle and my girl friend lived in Lynnwood, about fifteen miles away. She was sick of picking me up so I bought a car. Happy to report that she's long gone and the car's still here. In fact, as we were snarling our goodbyes, she said, "Well, at least you got a car out of it." Good'n!

In June of 2017, when the car had about 14000 miles on it, I and my dogs took a ten-week vacation and drove across Canada from Mile 0 of the Trans Canada Highway through British Columbia, Alberta, Manitoba, Ontario, Quebec and New Brunswick to the Atlantic Ocean at Halifax, Nova Scotia.

Then it was down into Maine, Vermont, New Hampshire, Massachusetts (four days on Cape Cod Bay totally by accident), Pennsylvania, Virginia, West Virginia, Kentucky (where a cloudburst in Frankfort made all the cars slam on the brakes and take it down to 20 mph), Missouri, Illinois, Ohio, Nebraska, Wyoming, Montana, Idaho and back to Seattle with 28,000 miles on the odo. "Double your mileage, double your fun . . ." A friend had told me about Miles City, Montana, so I stopped on the way to take a look and ended up buying a house there. I hurried home, retired, had my mechanic install a trailer hitch, packed my junk into a U-Haul and made a U-turn back to Miles City where I arrived with about 29000 miles on the car. 14000 in five years, 15000 in ten weeks. And in my five years here, 6500 miles, including seven trips to Billings totaling 2100 of those miles. So I drive maybe 900 miles a year. I go to the gas station about every three or four months.

Red and Roo ready for the road.


In 2017, my first winter in Miles City, we had three feet of snow on the ground for months, cars buried up to the windshield, temps way below zero day and night. Nothing slowed down the Outback except climbing through a foot of ice and snow just to get out of my garage.

The world's biggest axe, Nackawic, New Brunswick, up Canada way. I also picked up a growler of mead at the Big Axe Brewery.

johnre said:
Here's my odometer post, in better resolution than my avatar. It's been a while and this vehicle has accumulated quite a few more miles than the 88,189 that are shown here - not quite double - but thankfully most of them were without the driver you see here!

Yes, we are underway, as the tach and speedo attest. Do note the proper 10 - 2 paw positions. And no, this isn't road rage; he's always like this.
View attachment 552770
Click to expand...

LOL ok this is winner-winner, chicken-dinner in my book! Look at that beautiful li'l fur-devil! Amazing markings, too!
This is November's benchmark photo thus far, y'all better bring yer A-game pics after this gem! 😄😍

· Registered
2022 Wilderness
Joined Jul 17, 2017
·
775 Posts
Didn't even see the monthly challenge thing when I took this. The lonely end, South point, ORV ramp 72 Ocrakoke Island, also known to those of us who either live here, or call it a second home, Teach's hide. It's out well past the place any road goes on the island, and as far as you can drive on the sand. Any futher, and you're in the atlantic. Few come here when the gales of November start to blow. Certainly not the Tourons. Get stuck here at high tide, and the Atlantic will take your ride. Especially when the moon is full.

It's said that Edward teach (Blackbeard) used the south end of Ocracoke between Portsmouth Island and Ocracoke as his hide. His treasue is said to be buried here.... Somewhere. Teach isn't seen as a pirate so much as a local hero, one who rebelled against the crown, after they were through with using him to raid french shipping....

Cope point. Graveyard of the Atlantic. Hatteras light shines at dusk in the background. Winds were heavy this day, you can see the sand in the air down the shore line. Solitude. It works for me.

· Registered
2022 Impreza Sport-Tech, 2020 Legacy Premier GT & 2007 3.0R Outback LLBean
Joined Sep 7, 2007
·
563 Posts
I've been a member since 2007 when I first got my L.L.Bean 3.0R. It served me well for over 13 years. I finally traded it in 2020 after putting over 350,000 miles on it. There was nothing wrong with it, I just wanted something new. It's been all the way down I95 & I75. Up along the Atlantic coast from Georgia to Nova Scotia. Been in the Adirondacks, Laurentians and the Blue Ridge
mountains - sometimes in heavy snow. Never had any issues. All stock except for the after market 2” hitch and corner bumper guards bought as an accessory. Pictures from the day I picked it up to the day I dropped it off.

I live about 1 hour away from Washington DC. Along with normal commuting miles and up and down the east coast, the car has done several trips out west with the furthest being Las Vegas, NV......for now.